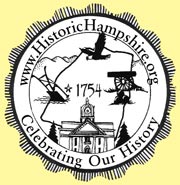 A Beautiful and Historic Land

We are redesigning our site structure and navigation. Please bear with us as we work.
Scroll down for subject list & navigation.

On the night of October 13-14, 2022 several fires occurred in eastern Hampshire County which destroyed four buildings. Unfortunately, one of the buildings was the historic Hook's Tavern which is listed on the National Register of Historic Places. We have a photo album of what Hook's Tavern looked like in 2006 and 2011 - Click here.

Lying just to the west of the great Valley of Virginia, Hampshire County, West Virginia has a rich and varied history. Once home to numerous tribes of prehistoric native Americans, the area was nearly empty and used only for a seasonal hunting ground when the white man first arrived. The fertile valleys of Hampshire's Potomac River tributaries were a welcome sight to the early settlers who longed for verdant, open spaces to satisfy their independent spirit.


Colonial Era
Sometime in the 1730s and 1740s the trickle of explorers and settlers began.  The migration was primarily from Pennsylvania rather than from the piedmont of Virginia.

County Established
In 1754, the opening year of the French and Indian War, Hampshire County was established with over twenty-six hundred square miles.  It was the western frontier of the Colony of Virginia.  Because Virginia's route to the upper Ohio River valley came through Hampshire County, the area became an important gateway to the developing west.

French and Indian War
During the trying years of the French and Indian War, Hampshire bore the brunt of enemy attacks.  Although Virginia was a long way from Canada, the French know that Virginia was one of the wealthiest and most populous Colonies and a leader in the push for British expansion to the west.  It was because of this that Col. George Washington, Commander of the Virginia Regiment, built  a chain of forts in Hampshire County as the northern bulwarks of his western line of defense.  Col. Washington was familiar with the area, having traversed it for five seasons as a surveyor for  Lord Fairfax, the proprietor of the Northern Neck Proprietary.During the terrible days of the first half of the French and Indian War, many settlers fled to more peaceful areas; many who stayed died on their farms at the hands of ravaging warriors. Before the fall of Fort Duquesne to Gen. Forbes in 1758, much of Hampshire County was devoid of people.  After the war, the pace of settlement increased.  In 1762  Romney was incorporated as the county seat. In 1787 Watson (later named Capon Springs) was incorporated at the medicinal springs in the south-east part of the county.

Transportation Routes Established
In 1786 a state road had been completed from Winchester to Romney.  As the frontier of the new nation moved westward, more roads were required to serve the expanding nation. In the 1830s the Northwestern Turnpike was built, eventually running from Winchester through Romney to Clarksburg and on to Parkersburg on the Ohio River.  By 1845 a stage line ran from Romney to Morgantown and Parkersburg.

The far western counties of Virginia were developing as industrial centers along the Ohio Rivers, but Hampshire and its neighboring counties remained rural, agricultural areas.  It was during the war that Virginia was split, and Hampshire County became part of the new state of West Virginia. Hampshire's placement in the new state was a matter of Federal politics and did not reflect the sentiments of the people of the county.

Counties to the west had ties to the North by way of  the  Baltimore and Ohio Railroad and the C&O canal; they had little in common with the commerce and government of Virginia. Hampshire County, on the other hand, was linked more to the Shenandoah Valley, and Hampshire's colonial heritage gave it stronger ties with the Commonwealth.  Therefore, its sympathies were Southern.  "Stonewall" Jackson had an early compaign in the County that attempted to cut the Federal government's transportation link to the western states that ran along the Potomac River, Hampshire's northern boundary.  Because of this strategic location there were many troop movements through the county  and Romney is said to have changed hands 56 times during the war.

Hampshire County raised thirteen Confederate companies for the war but only one Union company.  After the Civil War on Sept. 26, 1867, Hampshire's citizens dedicated what was perhaps the  first Memorial raised to Civil War dead of a Southern community.  It still stands today in Indian Mound Cemetery in Romney.

Hampshire County has great natural beauty.  Although the area is not now as bountiful for the hunter as was true in George Washington's day, Hampshire has always been an abundant land.  The rivers are wonderful for swimming, and they abound with fish. The skies above are filled with wildfowl.  The Trough, a cut that the South Branch River makes through the mountains, is one of the best locations for spotting the majestic bald eagle.  The Potomac Eagle, a sightseeing passenger train, runs from spring through fall so tourists may view the breath-taking scenery and the eagles.

The several communities with "Spring" in their name give a hint to another natural treasure of the area known to early settlers.  Even today, Capon Springs resort is renowned for its lovely wooded setting and its wonderful  hospitality. Ice Mountain on the North River is a geologic anomaly with rare flora near its ice caves.  Today it is maintained by the Nature Conservancy.  Throughout the county there are fields, streams and mountains that offer a feast for the eyes and for the spirit.

Romney, where  the first Literary Society in the state was founded in 1819, is home to the West Virginia Schools for the Deaf and Blind.  Hampshire County is a land mindful of its colonial heritage and the precious traits of character that made it strong. It is a place where the visitor will be made to feel welcome.

Save our Dark Night Sky - the County Comprehensive Plan is up for its review/reassessment so now is the time to get involved in saving our Dark Night Sky. This is the first step to notify the Planning Commission that it is a priority and needs to be included in the building code!

1866, Hampshire Asks for a Revote - Wants Return to Virginia


Modern Articles on the Civil War
Community Defiled, Sacking the Courthouse by Robert B. Wolford

Folks We Remember - people of note in community

Notes on the History of Springfield by Mrs. Heiskel

Notes on History and Roads of Capon Bridge (working notes)

Crossing the South Branch in Hampshire County by Eph Herriott, Jr.,
A History of our Bridges

Community Defiled, Sacking the Courthouse by Robert B. Wolford

The Old Northwestern Turnpike by Leonora Wood. This is wonderful travelogue along Rt. 50 through Hampshire and Mineral County. Although some of the description is dated, it still is a good guide to thing to see. From The Hampshire Review

Romney on the Menu videos by Ken Caldwell


Tidbits of History- Some interesting facts

Petition to Change the Form of Hampshire County Government
The long struggle of the citizens of Hampshire County to have a petition placed on the ballot to allow a change from a 3 person Commission to a "Tribunal" composed of one representitive from each district has ended unsuccessfully. To learn about the process, click here for the Petition Documents Archive.

Personal Items from from the South Branch Intelligencer 1867-1879 and the Hampshire Review 1884-1886 by Cheryl Singhal, word searchable

Reprints from our local newspapers including the South Branch Intelligencer, The Hampshire Review and The Argus

Families mentioned in the Advocate newspaper

Offsite link to the Potomac State Local Newspaper Project. This web archive contains the Hampshire Review and South Branch Intelligencer and newspapers from surrounding counties and can be word searched.

Survey Books A & B  NEW Updated

We invite churches to submit a short, general history particularly as it relates to buildings and community events in Hampshire County! We are not interested in histories of congregations although we may archive church baptism and marriage records.


Post Offices of Hampshire County- a history by Len McMaster

Destroyed Places  also and ones now Gone - Landmarks that have passed
West Virginia Schools for the Deaf and Blind Main Building - the Administration Building was originally the Classical Institute of 1847
Mytinger-Flournoy house on East Main St. in Romney
Hooks Tavern east of Capon Bridge

Neglected Places   - Buildings or sites which desperately need preservation or they will disappear.


For Place Names see Gazetteer below


The next map is quite detailed and quite large. It is 2388 pixels wide by 2316 wide; it is hardly viewable if printed on 8.5x11 inch paper, but can be enlarged to approximately 24 inches square.
Hampshire County map with most roads      John R. Ice County Map 1933 - top
John R. Ice County Map 1933 - bottom
This is the last road map of the county published before the 1939 Highway map when the State took over the road system. These are .jpg files you can either download by right-clicking on them and saving to your hard drive or you may view them in your browser. They are large files of approximately 450 megs.

Hampshire County Road Map is available from the State in .pdf format divided as north and south sheets: (Note: Hampshire County is going through road name changes in connection with a 911 Addressing System so this map may not be current.)

Several colonial era interpretative maps relating to Hampshire County are available from the Museum Shop of The Fort Edwards Foundation.

Romney on the Menu Videos

References in Official Records of the Civil War - work in progress

Chapter Index of History of Hampshire County by Maxwell & Swisher


Resources at other West Virginia location

We can not keep up with events, so please visit the Convention and Visitors' Bureau web site.

Anniversary of Women's Suffrage celebrated in 2020

Web links, Places to Go, Things to Do

Tidbits of History- Some interesting facts

Application information for the National Register of Historic Places

Examples of large graphic murals highlighting history or scenery from other places.

Sun bonnet pattern - full size; right click to download. Take to a quick printer that does blueprints and get approximate 36 inch square pattern.

This is a never-ending, always-updating project. If you or your organization would like to contribute a page to this site, we would be happy to correspond with you. We are looking for all the help we can get. It tooks thousands of people to originally write the history of Hampshire County; it is going to take more than a few to publish it. Please email corrections and/or suggestions and/or additions to: